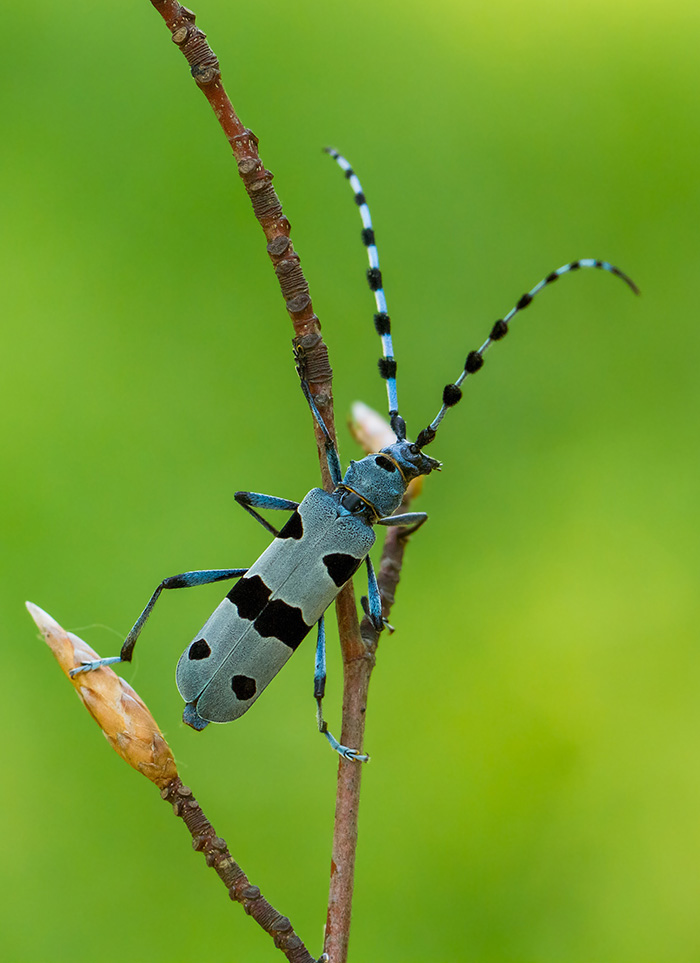 The project area covers an important region to Rosalia longicorn (Rosalia alpina) in Romania and Europe, as Romania hosts one of the largest populations of Europe and habitats in the area can host a large population and unfragmented. The adults of Rosalia longicorn can be observed between July and August. Diurnal active, they mainly feed on tree sap and young shoots and occasionally may fly in search of Umbelliferae flowers; in the afternoon and during the night they refugees in the tree canopy. The females lay eggs about 2-4 cm deep in the crevices of deciduous trees such as Beech (Fagus), but also in Ulmus, Carpinus, Tilia, Castanea ssp (mostly in trunks, branches, or pruning cuts). The larval development lasts 2-3 years and begins in decaying wood, exposed stumps, standing or fallen trunks, avoiding the contact with the ground. The xylophagous larvae drill galleries and feed on the xylem. The pupation takes place in spring or early summer, the adults emerging between June-August when they can be seen on the host plants.

The Rosalia longicorn habitats must meet a series of suitable conditions such as low-density forests or at the edge of the forest, avoiding shaded microhabitats; wood pastures (with isolated trees), sun and rain exposed trees; pastureland with very old trees and dead branches. The continuity of the deadwood recruitment is essential for dispersal. In the project area, the Rosalia longicorn occupies mature Beech forests with solitary trees of more than 40 cm of diameter. The mature individuals can disperse up to 1.6 km (journals.plos.org).

In our project, we planned the activities considering a dispersal value of a maximum of 500 m (conservative estimate). In a test area, we detected an abundance of under 20 individuals per ha, while favorable populations in Europe are at over 40 individuals per ha (natureconservation.pensoft.net ).

Rosalia alpina* will directly benefit from all concrete conservation actions and their associated preparatory and monitoring activities (A1, A4, A6, C1, C2, C3, C4, D1, D2).